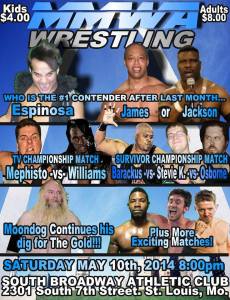 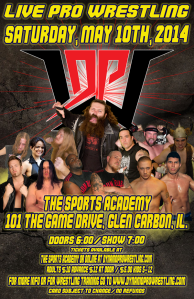 Mother’s Day is Sunday, and what better gift for Mom than a night of wrestling in the Gateway City on May 10?  Two of the three promotions represented on this site present offerings on Saturday night.

MMWA Wrestling is at its home at the South Broadway Athletic Club.  Brandon Espinosa will defend the MMWA Heavyweight Championship against the man he won it from in February, Brian James.

Last month, Espy and Ace Hawkins met Gary Jackson and Brian James in a tag bout.  If either member of the latter team scored the fall, he would earn a heavyweight title shot.  James pinned Hawkins.

Espinosa complained post-match that neither man involved in the fall was legal.  Even though that seems it should be true, the call stands and “Da Bomb” James will attempt to prove he’s no fluke by becoming a two-time champ.

Also on the card, Lynn Mephisto puts his TV Championship on the line against mandatory challenger, A.J. Williams.  Williams won a four-way elimination match last month for the right.

As well, Webmaster Stevie K will try to survive against Barackus and Dave Osborne.  The winner will be the MMWA Survivor Champion.

In the Metro-East, Dynamo Pro Wrestling emanates from the Sports Academy in Glen Carbon with a highly-anticipated main event.

Jake Dirden is the most dominant Dynamo Pro Champion there has ever been.  His toughest challenge may be an angry Puerto Rican named Ricky Cruz.

Cruz is no stranger to title gold.  In fact, he was the greatest SICW Classic Wrestling Champion ever, amassing a reign with 13 defenses over 13 months.  He said he was screwed out of that title, and screwed out of a proper rematch for that title.

Ricky believes Dynamo Pro Executive Director Mark Bland is holding him down as well.  Bland made Cruz start at the “bottom of the ladder” in Bland’s company.  In response, Cruz has put away everyone.

Last week, he beat Outtkast and Bradley Charles in a three-way.  There is no doubt that Ricky deserves a shot against “Dirdey” Jake Dirden.  This is a match where it’s hard to imagine either of them losing.