This Saturday marks the third annual King of Cable Tournament, the first to be held at the historic South Broadway Athletic Club in Soulard.

Eight men will compete in one-on-one matches under single elimination rules to determine the fittest, best wrestler in the St. Louis area.  The winner will receive a guaranteed title shot against the MMWA Champion at any time of the challenger’s choosing.  The previous two winners of the tournament–Brandon Espinosa and Dave Osborne–went on to win the title when “cashing in” their opportunity, so the stakes are incredibly high.

Let’s look at the bracket, shall we?

No seeds here; every man’s name went into a hat and was drawn at random.  Any of these men would make a fine King of Cable.  The Television Champion A.J. Williams will meet Battle Royal Champion Lynn Mephisto in the opening round, Jr. Heavyweight Champion Andrew Wilder faces Ace Hawkins, Da’Marius Jones squares off against the 2012 King of Cable ‘Big’ Dave Osborne, and two longtime rivals butt heads yet again as Brian James battles Jimmy D.

Also on the card: MMWA Champion Brandon Espinosa will defend his title against Gary Jackson and the Lumberjacks will be in tag team action.

I am a man aggrieved.  Two weeks ago, the Riverfront Times published its “Best of” list for 2013 and I am stunned—STUNNED, I tell you—that Sean Orleans and the MMWA were shut out across the board this year.

I had to scroll through all the categories not twice but thrice to make certain: Best Cheap Thrill, Best All Ages Venue, Best Place to People Watch, Best Sports Broadcast Personality, and Best Sports Bargain.

The brain trust at Riverfront Times apparently thinks the St. Louis Rams are a better bargain than the MMWA at South Broadway Athletic Club.  You’re telling me an $8 adult ticket and $4 child ticket for three hours of wrestling is not up to par with an atrocious football team that can’t even give tickets away?  Pish-posh, I say!

How is the South Broadway Athletic Club not the best place for people watching in the St. Louis metro area?  Good Lord, man, all walks of life are showing up month in and month out.  I’ve said it before on commentary and I’ll say it again here: it smells like Red Bull and teen pregnancy.  Now you tell me that that’s not a tremendous selling point…

Some of the guys have even confessed their dissatisfaction with the lack of a ‘Best Wrestler’ category.  The Midwest is a bastion for pro wrestling and St. Louis remains the Mecca.  Surely, the fine folks at RFT are not so obtuse as to ignore such talent still putting on top-notch events?  This has got to be an oversight…

But most galling is the lack of respect shown my way in the ‘Best Sports Broadcast Personality’ category.  To borrow a phrase, “I’m the straw that stirs the drink” on the MMWA television program.  Oh sure, Tim Miller and Ben Simon are nice enough guys and do a job best described as “fair to moderate,” but I’m raising the bar, people.  I’m educating the plebeians with my glut of wrestling acumen, and I’m losing out to Darren Pang?  A pox on your house, Riverfront Times! A pox on your house!

Four of our MMWA stars placed in the illustrious ‘PWI 500,’ which was released online Tuesday afternoon.

We obtained pictures of our four wrestlers and exactly where they fall in the rankings. 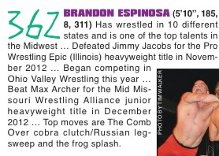 Our August card left some fans screaming in disbelief, others with their mouths agape.  The final match of the night, Gary Jackson vs. Lynn Mephisto, saw both men take their rivalry to a whole new level.

After being berated by Mephisto on the microphone, Jackson took control of the match and proceeded to whip the younger challenger from pillar to post.  In fact, Gary Jackson whipped Lynn Mephisto into a corner so hard that one of the turnbuckles popped loose and had to be fixed during the match.

Folks, I’m usually at the South Broadway Athletic Club hours ahead of the show and I get to see the ring being assembled, and let me tell you, it takes a lot of force to dislodge one of those turnbuckles from a post.  It took four men to reattach the turnbuckle.  So try and imagine the impact something like that had on Lynn Mephisto’s lower back.

With the turnbuckle fixed, both men continued tearing at each other.  The action spilled outside the ring and that’s where things went off the rails.  Mephisto attempted to whip Jackson into the guardrail, but Jackson reversed the move and Mephisto’s back tasted the steel.  Jackson lunged forward and clotheslined his opponent, sending both over the rail and into the front rows.

As the ref administered the 10-count, both Jackson and Mephisto used a chair on each other, causing a double disqualification.  But in some feuds, wins and losses don’t matter as much as “who got the last dig in,” to borrow a phrase.

Gary Jackson tossed Lynn Mephisto onto a plastic table, climbed up on top of it and proceeded to piledrive Mephisto down on the table.  Mephisto was out on the floor for several minutes and had to be helped (i.e. carried) to the back by staff.

A nearby fan snapped this image of the table shortly afterwards:

Afterwards, fans took group photos with the caved-in table like it was a celebrity.

We hope to provide video of this incident as soon as we can obtain permission and post it online.

The ‘Best in the Midwest’ are at it again this Saturday night at the South Broadway Athletic Club.

Battle Royal Champion Raphael King puts the title on the line in an over the-top-rope free-for-all!  After Big Dave Osborne’s interference cost Raphael King a shot at the MMWA Heavyweight Title last month, the two formed an uneasy alliance later that night in a losing effort against Brandon Espinosa and Ace Hawkins.  Following the match, King and Osborne brawled outside the ring, much to the fan’s delight!  You better believe those two still have a major beef…

The devilish Lynn Mephisto is still looking to take down ‘Gorgeous’ Gary Jackson any way he can.  Mr. Jackson has kept his wits about him and avoided Mephisto’s shenanigans thus far.  Sooner or later, these two WILL come to blows in a singles match…

Who will step up to challenge MMWA Champion Brandon Espinosa?  A few guys have called Tony Casta and Tim Miller to lobby for a shot at the belt.  Will the decision makers be swayed by a few honeyed words?  And if so, by whom?

Also in action: Moondog Rover, Phil E. Blunt, the high-flyer Ace Hawkins, and the menacing Jackson Whitechapel!  And Saturday marks the MMWA debut of Da’Marius Jones!  Folks, you’re going to want to get in on the ground floor with this guy before the stock goes public.

Doors open at 7 P.M., so get here early to make sure you grab a seat as close to the action as you can handle!

As always: Card is subject to change.

Folks, wrestling returns to the South Broadway Athletic Club this Saturday night, August 10!  Your MMWA Heavyweight Champion, Brandon Espinosa, will be in action, as well as Ace Hawkins, Big Dave Osborne, Lynn Mephisto and Gary Jackson, among others.

Saturday’s card will be significant as it will mark the MMWA debut of newcomer Da’Marius Jones!  He’s bringing his enthusiasm and zest for competition to the ring at South Broadway to tussle with the “Best in the Midwest!”  In anticipation of his debut, I reached out to young Da’Marius for an interview and we’ve got a brief transcription of it below.

Q: Let’s start this off nice and easy.  Who was your favorite wrestler growing up?

A: Chris Jericho is my favorite; best on the mic and best in the ring.

A: My favorite match growing up was the ‘I Quit’ Match between Rock and Mankind at the 1999 Royal Rumble.

Q: What about The Rock-Mankind I QUIT MATCH appealed to you?  What made it #1 for Da’Marius?

A: The sheer brutality that both men endured for the championship.  Gotta respect that.

Q: Where have you been training and for how long?

A: Been training since April and I was going to Florida to train before I got in contact with MMWA and South Broadway.

Q: You once told me about how you survived a car accident and showed me pics of your smashed up ride.  Tell the readers about that.

A: One month into training (May) I was involved in a bad car crash. On a rainy night I was headed to work in my Trans Am. I spun out of control and hit a wall on the highway.  I managed to get my car off the road and I attempted to make it back to the side of the car as a semi-truck sped by.  It hit my car and knocked it into me.  I went flying off the highway and landed in the grass and was taken away to the hospital.  Still came in to train a few days later, though…

Q: You got a finisher?

A: It’s a leaping inverted facebuster I call ‘The Upriser.’

Q: What’s your immediate goal?  Where do you want to be in 12 months?

A: In 12 months, I will be MMWA Heavyweight Champion and hopefully won’t have any broken bones to show for it.