The final event of 2010 will also be the biggest.

In a rematch from November 13, MO/IL Junior Heavyweight Champion Brandon Espinosa will defend against “The Wrestling Machine” Dave Vaughn in a 2 out of 3 falls match.

Last month, both men were counted out of the ring.  Look forward to a mat classic this time.

Herb Simmons issued a warning to Espy’s manager, Travis Cook: Interfere and you’ll be sorry!  Cook yelled back, “Oh, I’ll be sorry just like the other dozen times you made that empty threat!”

“The Crook” has a point.  Will Herb Simmons enforce his own warning?

A leather strap match is also on the card between Ron Powers and The Big Texan.  There will be welts, but these big boys are no welterweights.

When Powers and Texan meet, they tear the house down, literally.  Chairs fly, fans scatter and holes are punched in the walls of the East Carondelet Community Center.

PWI’s 2009 Wrestler of the Year Mike Sydal will wrestle in MMWA-SICW for the first time as he takes on NWA Central States Heavyweight Champion Mark Sterling.  The title is not expected to be on the line. 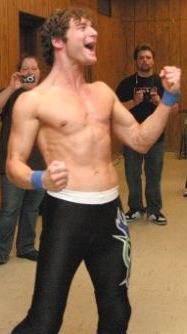 You may have seen Sydal recently on Ring of Honor cards.  Sterling also is one-half of the WLW Tag Team Champions.

There is no way you want to miss this one!

The future is here.  Then again, “The Future” is gone away from here.

Last Saturday, Gary Jackson made good on his word to dethrone “Future” Donovan Ruddick for the MO/IL Heavyweight Championship (earlier that day, Ruddick got screwed out of his HWC title in Rantoul, Illinois).

The veteran Jackson gave it his all; there was to be no screw-job here.  The end came when Ruddick was belly-up on top of the “Gorgeous One” going for a lazy pin.  Suddenly, Gary grabbed Ruddick’s close arm and hooked Ruddick’s far arm with his leg.

He pulled the massive Ruddick over until his shoulders touched the canvas.  Referee Bobby Patton counted three and the crowd erupted like never before.

As he said he would last month, Gary surrendered his Battle Royal belt to Commissioner Keith Smith.  Jackson is still a double champion.

Also on the card, Brandon Espinosa defeated Johnny Courageous… and this time, it was for the junior heavyweight crown.

Never fear, however, because the super Courageous Johnny won the newly vacant Battle Royal title in the main event.

As for Donovan Ruddick, he’s headed to Florida Championship Wrestling.  He took the mic and addressed the crowd in what may be his last match at South Broadway.

“I have done some bad things to people.  I know, I know.  But I just wanted to thank all of you and I don’t know if I’ll see you again.  If you have cable, you’ll be seeing me around.”

Fans have clamored for a prominent online experience from their favorite wrestling promotions for years.  Most feel that MMWA-SICW is just not up to par in the Web realm.

Well, Joe, we agree to an extent.  However, never forget that MMWA-SICW is the only wrestling outfit from here to Kansas City (and further than that out east) to have a real TV show: Wild World of Wrestling.  Even non-fans in St. Louis have tuned to DHTV Channel 981 by accident and seen South Broadway wrestling.

Nevertheless, we hear your gripes.  That’s why this site was made.  It’s also why we will now shoot in high definition.

This Saturday, we will have our first real test run with the camera at the SBAC.  By the new year, MMWA-SICW will have a gameplan for the new YouTube version of Wild World of Wrestling. Don’t worry about the traditional public access show; it will remain on the air.

Our YouTube show will include full matches and interviews from our live events in 1080i HD.  And friends, no promotion from here to Kansas City will do it like this!  See you at the show, Joe Schmo.

Hair regrowth is not a guarantee
There is no guarantee that hair regrowth will occur. One will know in 6-9 months if they will acheive full regrowth or not because that is how long it takes for hair to grow back following any type of injury.

It is certainly possible for repeated pulling to give permanent hair loss. However, in the vast majority of cases where hair is pulled from the scalp, hair grows back with a little help from a castor oil for hair. If you or I were to reach up a pluck a hair, it will grow back. However, if pulling is repeated many times or is excessive with bleeding a greater chance exists for scarring to develop. Hair pulling that is accompanied by injury to the skin layers (i.e. that creates an actual wound) has a markedly increased chance of being associated with permanent scarring. It is such scarring that blocks the regrowth of hair. Scar tissue is permanent and, if present, generally destroys stems cells.

Anyone with concerns about incomplete growth after episodes of hair pulling should see a physician who specializes in hair loss for consideration of a scalp biopsy.

Controversy abounded October 9th at South Broadway in the first match.  Johnny Courageous was advertised and announced as defending his Jr. Heavyweight title against Brandon Espinosa.

However, halfway through the encounter, announcer Ben Simon got word from Commissioner Keith Smith that the proper sanctioning wasn’t obtained by the SBAC and the Missouri Office of Athletics.  Simon then made the announcement public over the PA while the match was in progress.

Immediately, Espinosa and his manager, Travis Cook, became enraged and started arguing with Executive Producer Tim Miller and Smith (they fought back that it was an honest mistake).

Espinosa pinned Courageous for the match, not the championship.

Ever since this match had been signed last month, it had been authorized as a non-title contest.  This gaffe wasn’t noticed until halfway through the match by Smith.

Espinosa retained his Battle Royal Championship later in the night against nine other men.

Cook screamed, “The brass here in the MMWA is trying to put us down, but they saw tonight what ‘Thee’ Brandon Espinosa did.  He’s the real champion.  Promoters Tony (Casta) and Herb (Simmons) just want to protect their boy (Courageous).”

The popular Johnny Courageous later countered, “I really do hope it was an honest mistake; I don’t need to be ‘protected’ ever.  Unlike Cook’s guys, I can live with losing, just as long as my opponent defeats me fair and square.”

We at MMWA-SICW admit it: Travis Cook and “The Elitism” were screwed by mistake.  But they’re big boys and they will rebound just fine… they always do.

Two big matches are set already for this Saturday in East Carondelet.  First, Ron Powers takes on any two wrestlers in a handicap match.

Also, after last month’s unfortunate no contest to the great match between Vaughn and Danny Boy, Larry Matysik laid down the law.

The “law” is Vaughn and Danny Boy teaming together in a 2 out of 3 falls tag match.  Go to MWR below for more.

Before we head back to South Broadway this Saturday (dress up for the costume contest), let’s look back at the Hillsdale event; the sun was out and the slams were heard all around the neighborhood.

Legendary commentator from the St. Louis Wrestling Club, Larry Matysik, is on the Arizona dial tonight. 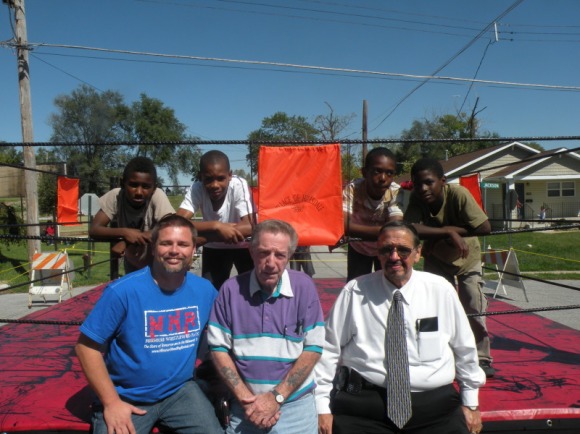 Residents of Jesse Jackson Ave heard some thuds and came out of their houses to see…a wrestling ring!?

Click below for details on both events Saturday in Missouri and Illinois.  Come to one or both; the early one is free!